I wanted to share a new package I create that adds a four digit year overlay (e.g. the text "2009" in orange font) to the LabVIEW EXE program icon (similar to LabVIEW 2014 icon), as shown below

Now, for those interested, here's a little bit of the backstory on this useful tool...

A while back, the great @dnatt posted an excellent idea for a new LabVIEW feature -- adding a version number to the LabVIEW icon so it's easy to tell them apart when they are on your Windows taskbar. Since that was a such a wonderful idea, this feature was added to LabVIEW 2014 (thanks, NI!).

But, what about older versions of LabVIEW? How do you tell those apart?

In response to this need, several people posted customized icons for various versions of LabVIEW. This now made it possible to tell all of these older versions apart.

You can tell which version you're launching from the Windows taskbar (as shown at the top of this post).

And, you can see on the icon in the Window Titlebar which version of LabVIEW a given VI is open in (since sometimes when you double-click a *.vi file it opens in the "wrong" version of LabVIEW and you don't realize it -- that's painful especially if you save it in a newer version!). 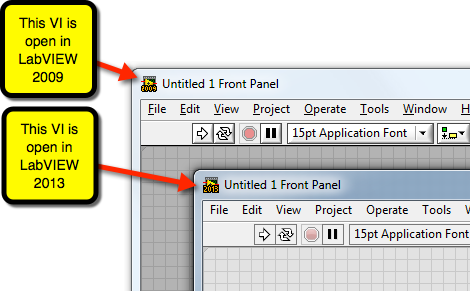 In closing, I'd like to give some special thanks, not only to @dnatt, but to everyone who posted the icon files that I used in this package: blawson, John.P, Bob_Schor, asbo, David_L, and others. The LabVIEW community is truly a great thing -- I can't take credit for the idea or the great icons. I only packaged them up so they would be easy for everyone to find and use :-)

I hope you find this tool useful in your LabVIEW programming! If you have any issues, let me know @jimkring.