We're excited to announce the 0.6 release of Caraya, the easiest-to-use software unit testing framework for LabVIEW! This release includes significant usability improvements, custom reports, and much more thanks to the contributions of the community.

Special Thanks to LabVIEW Community Members

First we'd like to give special thanks to several community members for their bug reports, feature requests, coding contributions, and more! We couldn't have done it without you: Christopher Field (@volks73), Stefan Droege (@StefanD986), Kosist (@kosist), Francois Normandin (@francois-normandin), Omar Mussa (@omarmussa), Jim Kring (@jimkring), OlivierLabo (@OlivierLabo), James Powell (@drjdpowell), Neil Pate (@neilpate). Thank you all for your generosity of time, effort, great ideas, and attention to making this an amazing release of Caraya!

Extra special thanks to Francois Normandin (@francois-normandin) for helping spearhead this release, including the design and implementation of several of the new features/fixes, integration of various contributions from other developers, and wrap-up of the validation, build, and release of Caraya 0.6! We couldn't have done it without you!

Here is a run-down of the new features in this latest version:

Easier to use Assert function

Now, there's a single PolyVI for Assert that shows a menu of available options. This can easily be quick-dropped as "Assert". And, for those who want to use the palettes, you can still find all the specific instances of Assert under the Assert Functions palette.

Now, the Test Suite function allows you to pass in a custom Test Report class that allows you to format your test results any way you choose. And, we've even included a very simple JUnit test report, so you can see how this work. 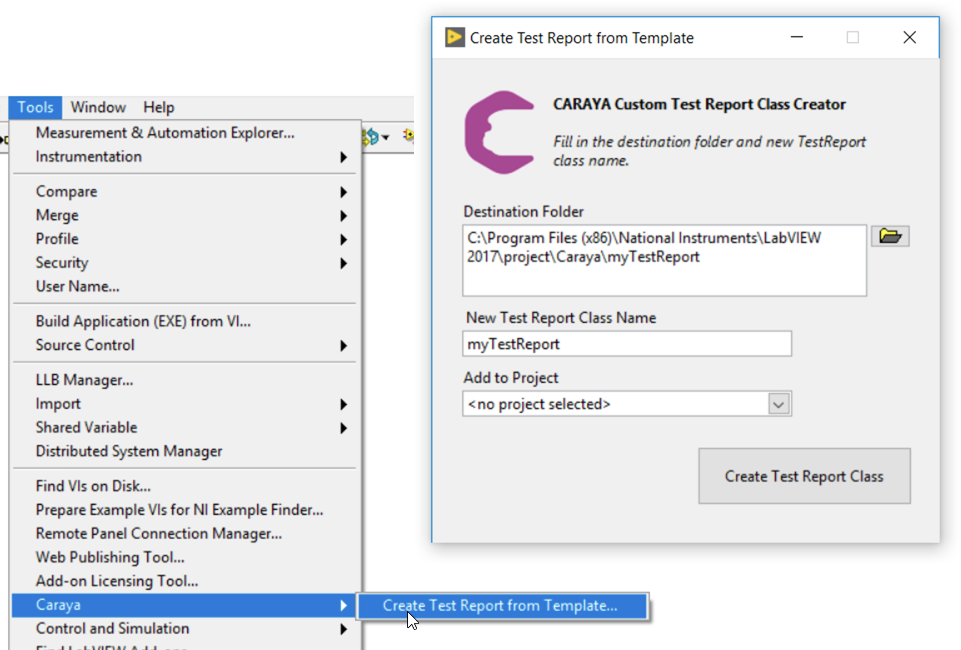 Now, it's possible to include and run Caraya tests inside a deployed (built) executable (EXE) application. This opens up a lot of possibilities for testing functionality inside of deployed applications. See here for more details.

Equality comparison by Value, Value and Type, or Type

Previously, the Equality Comparison was by Value and Type, which meant that (for example) comparing a U32 and I32 would fail, regardless if they had the same numeric value. Now, there are separate functions that allow comparing equality by Value, Value and Type, or Type. 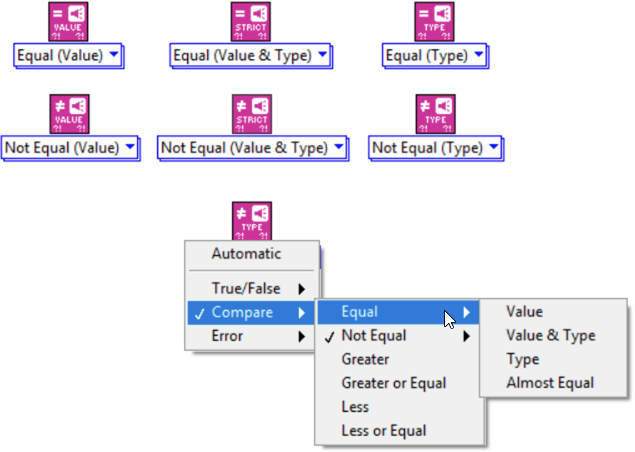 Now, there's a function called Almost Equal, which allows specifying a tolerance (absolute or percentage) for equality comparisons. This is very helpful for some floating point comparisons. 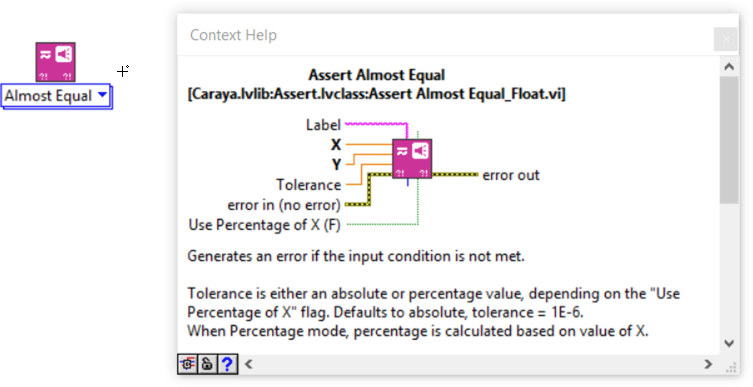 Double clicking on a test result (in the UI) will highlight the specific Assert function for that test result. Previously, it simply opened the VI that contained the assertion, which could have multiple assert functions being called. This helps the developer hone in on which test failed, when navigating from the results UI.