Secrets of the VIPC: Pinning Packages

A while back we wrote about the Secrets of the VI Package Configuration (*.vipc) file, which is used by VIPM to keep track of which packages are used in your LabVIEW projects.

This makes VIPC files great for:

To create a VIPC file, VIPM scans your LabVIEW projects to automatically find package dependencies. However, sometimes you need to manually add a package that VIPM can't find, or perhaps you're using a packaged development/build tool that's not really part of your source code.

In these cases, where packages have been manually added, you probably don't want VIPM to suggest removing the package after doing a Scan Project to find package dependencies. That's where "Pinning" a package comes in very handy. 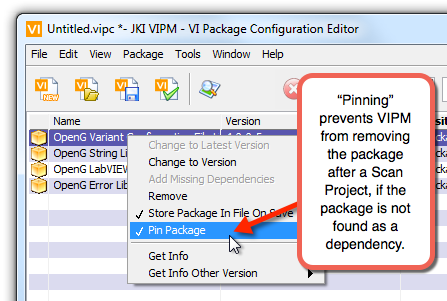 “Pinning” a package prevents VIPM from removing the package after a Scan Project, if the package is not found as a dependency. To pin a package, right-click on the package in the VIPC window and chose Pin Package (note: if it has a checkmark next to it, it's already pinned).